Difference between revisions of "Chapter 19 CC18"

Rhythm is an essential consideration in the production of motion graphics. One of the most common and simple time signatures is 4/4, where four beats are evenly heard over one bar of music and each note is one beat. House Music has a 4/4 beat. This method of counting time can be applied to animation. In House music, the beat is counted in cycles of eight. The rhythm is established and peaks at the fourth beat. It reduces in the next four beats, in preparation for the next set of eight beats. One of the key concepts in understanding animation is visualizing time. Whether you are keeping track of the musical score or graphic frames on a timeline, counting time is important and "seeing" the count is a necessity.

Early experimental animation can be drawn upon as an example of seeing time kept with abstract, basic shapes. The work we will be doing is more like Oscar Fischinger's later work, "Early Abstractions" (1946 - 57). Harry Smith's homage to Fischinger remains abstract, though it is even more layered and complicated. Balance changes over time, shapes change in size and transparency. Rhythm is used to create a sense of predictability within the abstraction.

4. Drag the sound clip from the Project Panel to the Layers panel to insert it to the composition.

2. Draw a Solid Circle using the Ellipse Tool and move it to the right side of the composition, centered vertically. You can change the fill and stroke from the toolbar.

3. Select the Type Tool and add the letter “O.” Move it to the center of the composition and make sure its anchor point is in the center using the Anchor Point Tool (Y). Adjust the circles so that all three are roughly the same size.

1. Create an initial keyframe so that you can change the position of the circle. In the layers panel, click the arrow next to the “Circle.ai” layer to expand the twirl down menu. Do the same for the Transform menu, and then click the stop-watch next to Position while the playhead is at the first frame.

5. Select the solid shape and make a keyframe for Color (Contents > Ellipse 1 > Fill 1) at the first frame.

7. Go to the last frame and duplicate the first keyframe.

1. Repeat the first steps in Exercise 3 to create a new layer above "circle rt" called "circle lft." Add a third circle to the left of the original with a new hue. 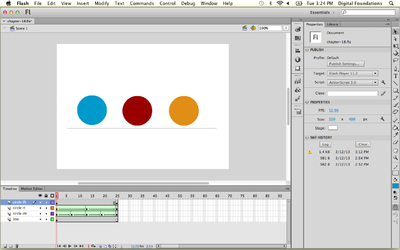 2. This circle is going to have a shorter cycle than both of the other shapes. This will result in the fastest tempo. Add a new keyframe on this layer at frame 25 so the circle will end in the same position. When an animation is supposed to cycle seamlessly, a keyframe should be placed at the end of the layer holding the same content as the first frame. 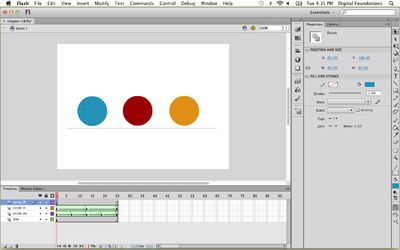 3. Insert a new keyframe every three frames. In each keyframe, move the circle up or down with the Selection Tool. 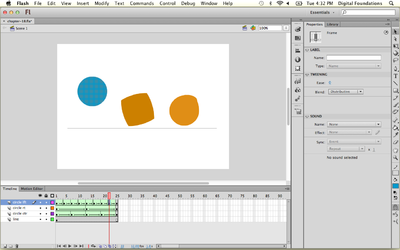 We started on the second keyframe (frame 4) and used SHFT+Up Arrow three times (Shift + up + up + up) to move the circle 30 pixels higher than it's starting point. On the next keyframe, we used SHFT+Down Arrow. On the following keyframe, SHFT+Up Arrow four times. On frame 13, SHFT + Down Arrow. We repeated this pattern throughout the layer so the circle would look like a ball that bounces higher each time it hits the ground. 4. Create a shape tween between each keyframe.

5. Use CMD+return to watch the new animation.